WHAT SEROTONIN DOES NOT EXPLAIN

Depression raises many questions. Why, for example, is it cyclical? It is well known that this psychopathology tends to resolve itself on its own and reoccur after a period of full or partial remission, when it becomes chronic. Drugs, at best, accelerate a remission that occurs in the natural course of the illness. If we exclude dysthymia, the other forms characterized by severe depression have an on-off pattern. Depression is either there or it is not. Patients often describe entering or emerging from the “illness” as sudden, sometimes unexpected events. This is a peculiarity of severe depression. When other psychopathologies become chronic, they tend to remain over time: the severity of the symptoms fluctuates but the disorder remains”.(Ugazio, 2013, p.223).

This is not the case with depression. Why?

The enigmatic connection between depression and art raises another question. How come people with a triple negative vision -of themselves, of the world, and of the future (according to Beck’s famous definition) – are able to create important works and among them some of the greatest artistic masterpieces? Why do they often make notable works, not only in the field of art, but also in the economic, professional, and business worlds? And, as now many studies have shown, why do people with depressive organizations contribute to creating the negative events that tend to hit them more frequently than in other organizations? Finally, how come people with a great ability to sever ties, and with such a keen sense of loneliness as the chronically depressed, break up the couple’s relationship with so much difficulty? Linares and Campo (2000) stress, and rightly so, that severely depressed patients, as well as bipolar patients, are among the few psychiatric patients to establish a stable and meaningful couple relationship. (ok,D)

I answer many of these questions and others in:

SEMANTIC POLARITIES AND PSYCHOPATHOLOGY IN THE FAMILY

A CONVERSATION DOMINATED BY THE SEMANTIC OF BELONGING

One of the theses put forward in this book by Ugazio is that the semantic of belonging dominates the conversation in families where severe unipolar and bipolar depressions develop.

The most important thing for members of these families is to be included as part of the family, as well as being part of the wider community. The reason is that within the same family group there are also those who are excluded, marginalized or rejected. Expulsion from the group, or not belonging to a family, is seen by such people as an irreparable disgrace, whereas the greatest good is to be well-established and respected within the groups to which they belong, including family and community. (Ugazio,2013 p.228 (ok,D)

When the semantics of belonging has a long history in a family, extending back over several generations, those who are black sheep, or have been disowned, defrauded or forgotten, co-position themselves with individuals who are respected, worthy of being remembered for their actions, or have simply been included by divine grace among the elect. Illegitimate births, desertions, abandonments are matched with fortunate events such as inheritances, fairytale weddings, professional honors, dazzling careers. Life for some seems to have been harsh, while for others it has been particularly kind. Some members of the family are adored and admired while others are ignored or become the object of aggression and violence.(Ugazio, 2013,p.) As far as we know, this is what happened in Virginia Woolf’s family.

Even if serotonin deficiency were really the cause of depression, as has been heralded for years by biological psychiatry and the pharmaceutical industry, the questions to which I answered, like others that depression raises, would receive no response.

BUT DOES SEROTONIN REALLY PLAY AN IMPORTANT ROLE IN DEPRESSION?

It appears that this is not the case. The available studies do not show that serotonin deficiency has a causal effect on depression

Since the 2000s, the thesis that depression is a brain disease, similar to asthma or diabetes, its alleged staggering growth in the West, and the efficacy of serotoninergic drugs have been severely challenged, especially in the United States. The debate developed about depression and SSRIs has undermined the credibility of psychiatry itself, hypothesizing deep collusion between psychiatry and Big Pharma. The reasons are not lacking. Our data show that around twenty-five percent of depressed patients have low levels of serotonin or norepinephrine (Valenstein, 1998; Horwitz and Wakefield, 2007). If the hypothesis of serotonin deficiency were etiopathologically correct, then it would explain only a limited part of cases. But it is not correct, at least etiopathologically. The low levels of serotonin found in these patients may indeed be the consequence rather than the cause of depression. No empirical evidence has shown that chemical imbalance is the cause of depression. Indeed, we know that exactly the opposite happens in apes. Research carried out as early as the 1980s by McGuire and collaborators on vervet monkeys, and subsequently replicated in depth also on other types of non-human primates, show that levels of serotonin, and other neurochemical correlates, vary in relation to the social status of the animals. In a series of experiments, it was found that the higher-status monkeys had twice the serotonin levels of the pack, but if they were removed from the group they dominated, their serotonin levels quickly dropped and appeared to human observers “depressed”. Conversely,  other monkeys, with the removal of the dominant monkeys, had gained high status, and rapidly increased their serotonin levels.

For more info, I suggest you to read this enlightening text: A.V.Horwitz and J.C. Wakefield (2007) The loss of sadness.  New York: Oxford University Press

The results that had the greatest resonance, concern the efficacy of Prozac and other SSRIs, and their secondary effects as they emerged from double-blind clinical trials. These are staggering results. Presented as miraculous, these drugs have identical or slightly superior effects to a placebo. This data is dubbed the “dirty little secret” because big Pharma was well aware of it.

IS IT TRUE THAT SSRIs INCREASE SUICIDAL RISK?

It seems so, and this is the most worrying fact of the so-called “little dirty secret”. The Federal Drug Administration knew this and was silent.

The increase in suicidal behavior has been shown in children, adolescents, and young adults so much so that the Federal Drug Administration recently concluded that:

SSRIs duplicate the risk of suicidal thoughts and behaviors in depressed subjects up to the age of 24 (Kirsch, 2010, p. 151).

IS IT TRUE THAT DEPRESSION IS INCREASING EXPONENTIALLY?

Certainly not as much as it would seem; the alarming data, released in the last twenty years, are generally inflated. The diagnoses and the pharmacological treatments for this disease have increased because the diagnostic criteria have changed.

Starting from its third edition in 1980, the DSM introduced criteria so little discriminating and decontextualized for the diagnosis of “major depression” that this diagnostic category both included normally sad people due to negative events, as well as patients suffering from clinical depression. Two-and-a-half-thousand years of Western clinical tradition have been swept away by the last three editions of the DSM. Even the traditional psychiatric distinction between “endogenous” depressions – caused by internal processes, in the absence of negative external events – and “reactive” depressions – triggered by losses and other negative social events – is ignored.

The West is not facing an implosion into depression. Serious forms of unipolar and bipolar depression remain infrequent. It is the criteria for diagnosis that have changed: sadness has been transformed into a mental disorder and clinical depression has been equated with manic-depressive psychosis, now dubbed bipolar disorder(Horwitz and Wakefield, 2007,p.182) 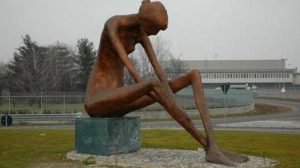